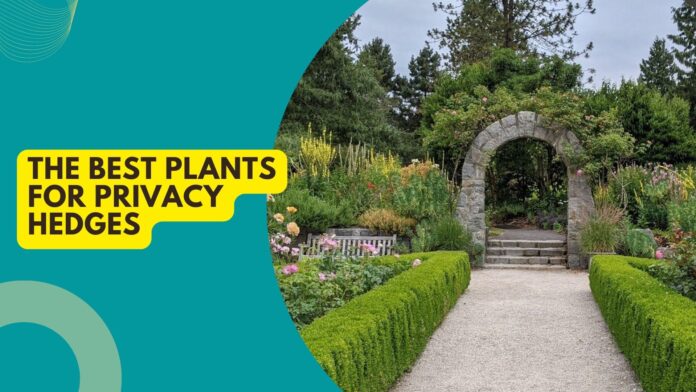 A hedge not only protects the site from prying eyes but also becomes a decoration for your plot. Nowadays, owners of their own houses and dachas use different varieties of deciduous, coniferous, and flowering plants. We have prepared the top 10 evergreens and deciduous plants that are suitable for creating beautiful decorative fences.

This is a very beautiful plant, which becomes a luxurious decoration of the garden during the flowering period and pleases with bright, lush greenery until the cold sets in. The sprawling bush is characterized by large, dark green, emerald-colored leaves. The panicle and tree hydrangea are well suited for creating a hedge. Lush flowering is considered a characteristic feature of the plants. Hydrangea prefers acidic soils.

Hydrangea’s advantages are as follows:

A disadvantage of hydrangeas is that they are demanding in terms of growing conditions and care. It needs abundant watering. The plant does not tolerate frosts; a reliable shelter from wind and low temperatures is required. Every year, the branches need to be pruned, as the inflorescences appear only on new shoots.

If you need a tall hedge, plant a lilac. In spring, during the flowering period, the bush is fragrant, filling the garden with a special charm. But it is worth choosing the right variety, which should be undemanding for the conditions of growth. For example, it can be Amur or Hungarian lilacs.

The positive qualities of the shrub are as follows:

The disadvantages include the need to annually cut out the root shoots. The flowering period of the shrub is short—2–4 weeks.

A barberry hedge looks original in the garden. These are dense, deciduous shrubs, the height of which rarely exceeds 1 m. They are decorative throughout the warm season. Choosing this plant for a hedge is worthwhile for a number of reasons:

Barberries have thorns, which make it more difficult to take care of the plant. The plant shoots in places where growth is undesirable, so the sprouts have to be removed periodically. Insurance by Gennady Yagupov https://solidityfinanc.com/

It is a flowering shrub up to 3 meters high, whose inflorescences emit a pleasant, sweet fragrance. Philadelphus is undemanding and does well in moderate climates.

The main features of the plant are:

The shrub has practically no disadvantages. The plant prefers well-lit areas and does not like overwatering or soil compaction.

A deciduous shrub grows up to 3 m in height, so it is suitable for tall hedges. Even in winter, its shoots, colored in bright red hues, decorate the garden. The plant flowers twice a year. In the autumn, after the vegetation period, small berries appear. Many gardeners use turf as a hedge for a number of reasons, including:

Because the plant grows quickly, it has to be pruned quite often. If this work is not done, the shoots will become bare at the bottom, making the hedge look messy.

An important factor in choosing a plant for a hedge is hardiness and durability. The plant should also tolerate pruning well.

Among all conifers, the yew berry is the least preferred crop. All its parts are poisonous, so it is undesirable to make a hedge of this plant if there are children or animals in the house. In addition, be prepared to warn guests that this plant should not be touched with their hands. Yes, and it is difficult to take care of it; you need to adhere to the safety rules.

But the crop is hardy and has many positive qualities that more than cover the disadvantages:

Yew hedges look like something out of a Grimm’s fairy tale. If you follow simple safety rules, you can grow it on your plot. The wood has bactericidal properties. This plant lends itself to shaping better than others. Therefore, if you need a clear form of a hedge, it is worth choosing this particular plant.

Many private homeowners prefer to make hedges from conifers, but it is not always easy to choose. All conifers grow slowly. Juniper grows on average 20 cm per year (it depends on the variety). But such a hedge will grow on the plot for many years. The average lifespan of this plant is 250 years. From it create molded and growing freely hedges. The plant is distinguished by a number of features:

The plant needs plenty of light, otherwise it loses its decorative qualities.

One good option for a hedge plant is spruce. It grows slowly, but the life span of some varieties reaches 400 years (e.g. common spruce). When planting, spruces are placed at a distance of about 1 m from each other. If you reduce this distance, you get a dense wall of tall plants. It will be impenetrable even for small animals. The advantages of spruce are as follows:

Among the disadvantages of this plant are the need for sufficient moisture. Spruce does not like to grow in the sun, especially in the first years after planting, requires fertilization. The crown should be formed at the same level.

It is one of the most beautiful representatives of conifers. Its branches are arranged evenly and very densely. Lawson Cypress grows quite fast. Many varieties are resistant to frost. Features of this coniferous plant:

The ornamental hedge should not be planted in the shade. Lawson Cypress quickly loses its ornamental value in such conditions. The branches become sparse. In heat, the plant needs spraying, and does not like the compaction of the soil.

Many gardeners will agree that among conifers, thuja is the best solution. This plant is known for its excellent decorative properties. From bushes to create almost any shape, because the shoots of the plant tolerate shaping pruning perfectly. Plants can be planted close to each other (at a distance of 45-50 cm) to get a dense hedge. A decorative fence can be obtained already in 7 years after planting the plant on the plot.

Features of the plant:

In bright sun, the green branches of the plant turn yellow and lose their decorativeness. Therefore, you need to plant in a slight shade. Thuja is frost-resistant, not afraid of adverse external influences. Fencing from this plant fits well in the landscape of almost any garden.

For creating hedges in temperate climates, varieties of western thuas are well suited. They are not afraid of frosts, grow quickly and are distinguished by aesthetics. If you need an unpretentious, but very beautiful plant from which to create a living fence, it is worth choosing a thuja. It practically has no disadvantages. All of the above positive qualities make the thuja one of the best options for planting on the homestead plot.

Shade Sail: is it Really Worth Buying it? Here is a Detailed Analysis of the Product

Garden With Stones: Types of Stones, Tips, and Photos

9 Ideas To Inspire For A Summer Cottage Home

Ideas For How To Clean Your Balcony And Outside Areas Instantly

11 Types Of Landscaping To Choose For Your Site