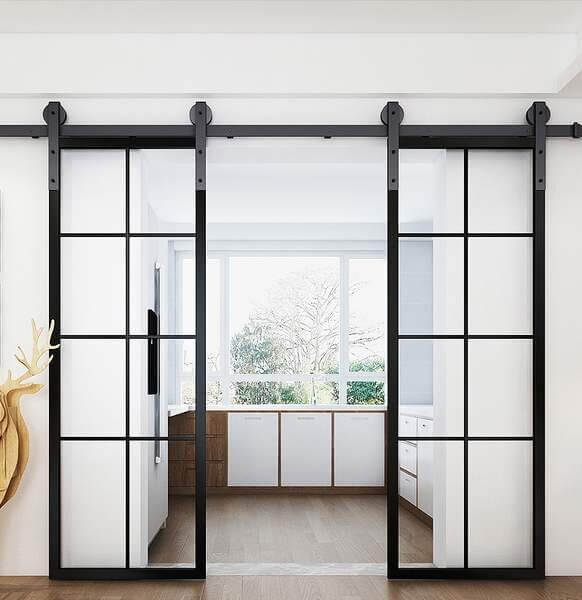 A rare kitchen is complete without doors. Indeed, in an open space, steam and odours from the cooking process scatter throughout the apartment and are “absorbed” into upholstered furniture, carpets and curtains.

The problem is that most kitchens are not too big. If the battle is for every centimetre of usable area, there is nowhere to install the usual swing door, but you need to divide the space. Sliding kitchen doors would be the most acceptable option in this scenario.

Advantages and disadvantages of sliding systems 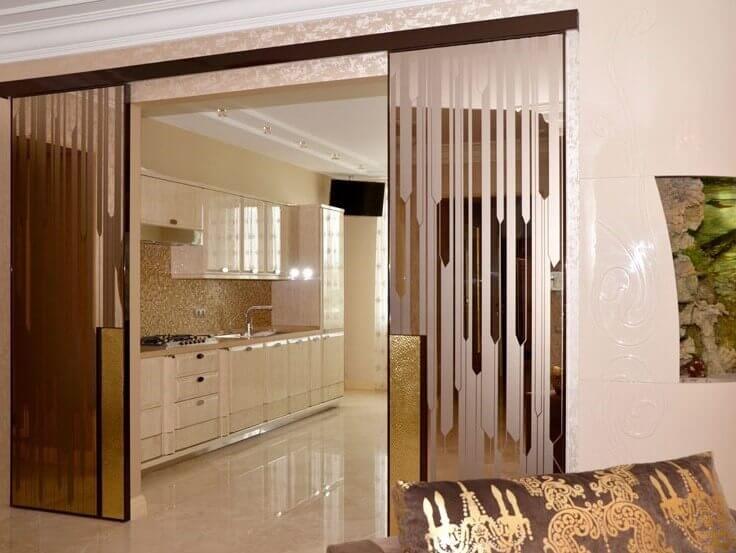 The retractable system is a very controversial element of the interior. The number of advantages and disadvantages is approximately the same. 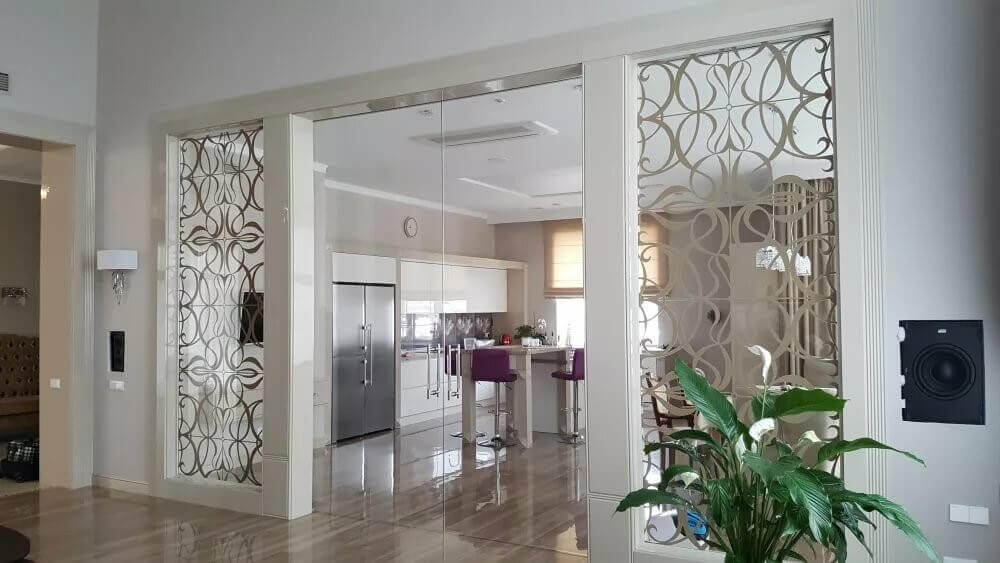 The list of disadvantages of such systems is no less impressive: 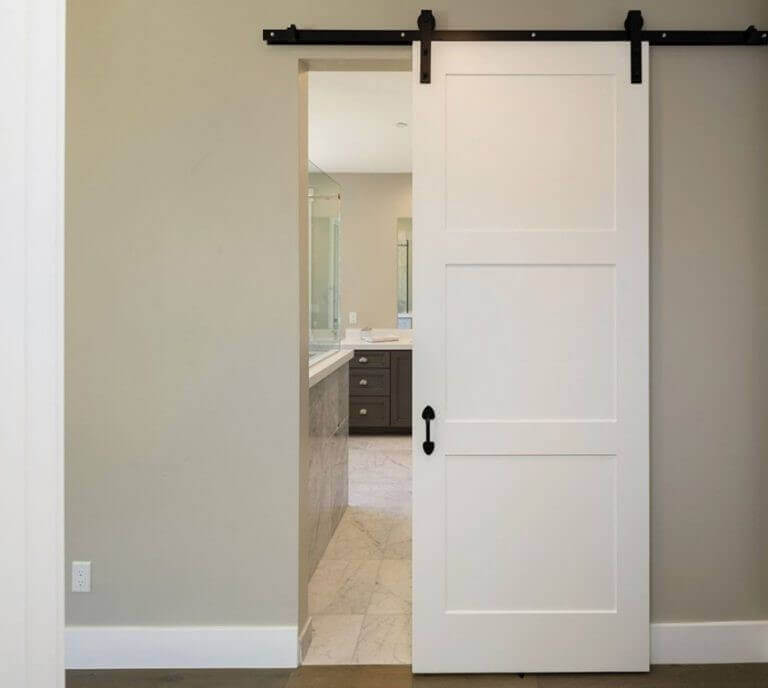 Despite the pervasive list of “minuses”, sliding doors continue to gain popularity because for small kitchens (in Khrushchev, Brezhnev, etc.), they become the only acceptable solution.

It should be borne in mind that many varieties allow you to choose a suitable option. The number of advantages will significantly exceed the number of possible disadvantages.

There are several ways to classify sliding systems. It is worth dwelling only on the most popular types of systematization.

All sliding systems are divided into doors and partitions.

In the first case, it is a full-fledged door leaf that is used. It moves along an overhead rail that is attached above the opening. There are two types of models depending on the installation method: 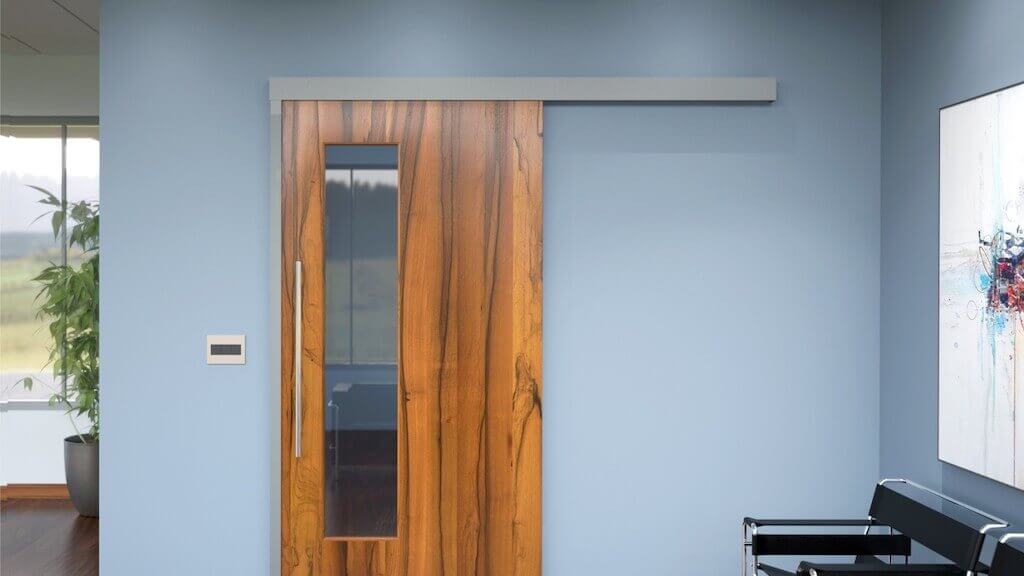 Sliding partitions are doors from a wardrobe. The same materials are used for them:

In this case, the structure turns out to be much lighter, the thickness of the sash is much less; therefore, in most cases, it is possible to install it only with the lower guide, along which the canvas moves on rollers. 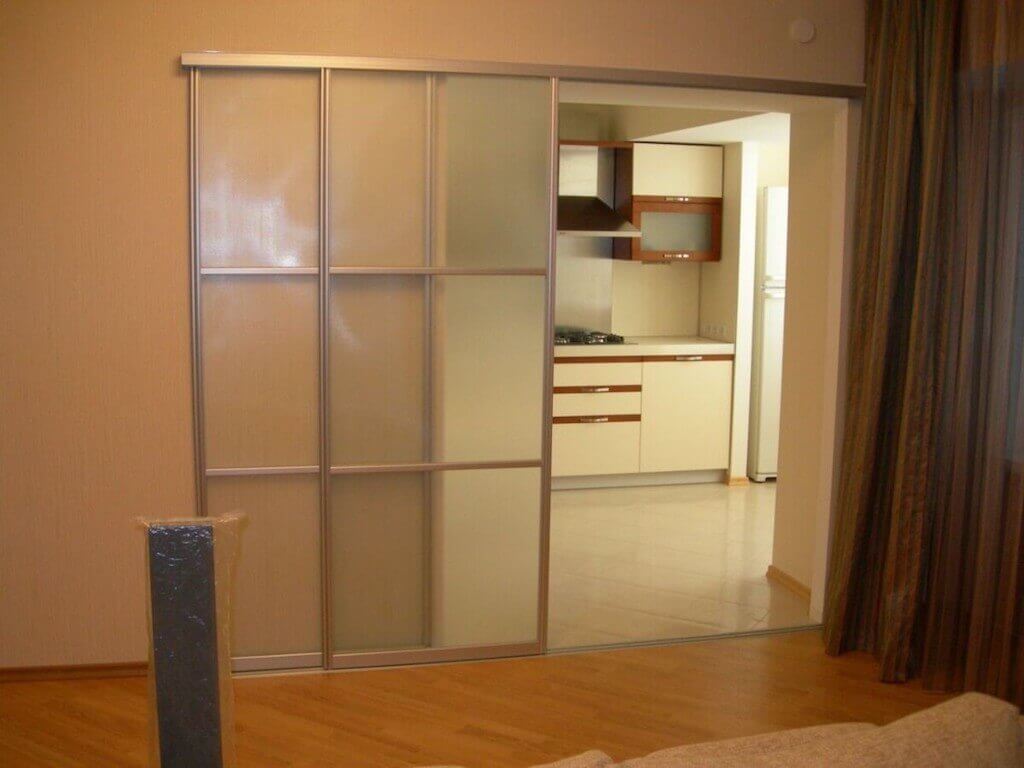 As for the cost, partitions are usually cheaper than doors, but if there is an elaborate decoration on the sashes, their cost can exceed even the most expensive natural doors with a conventional design. 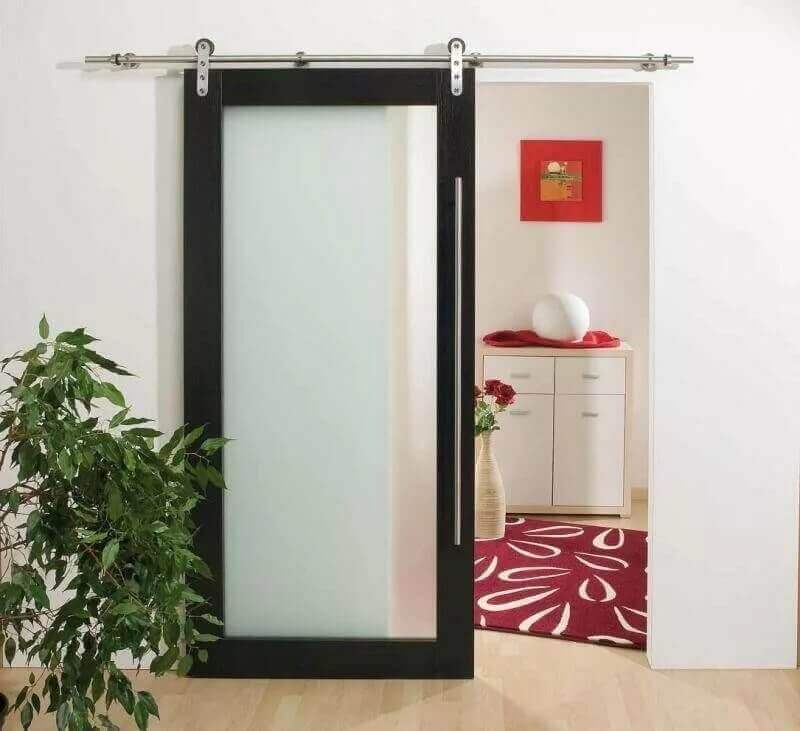 Both versions of the systems can be made from full-fledged door leaves and lighter and airy partitions.

Single-leaf doors are installed when a corridor adjoins the kitchen.

Double doors (and more) are more often used in studios. Such a sliding system between the kitchen and the living room allows, if necessary, to divide the space into two separate rooms or combine them into one.

Two sashes can be installed in one direction to reduce the number of guides on the floor (in this case, unique stoppers are added to fix the canvas in the right place). It is less convenient, but it saves money.

Both partitions and sliding doors are used equally to separate the kitchen from the living room.

When using partitions, the structure is lighter and airier. The uniform design of all the doors creates the effect of a sliding wall. 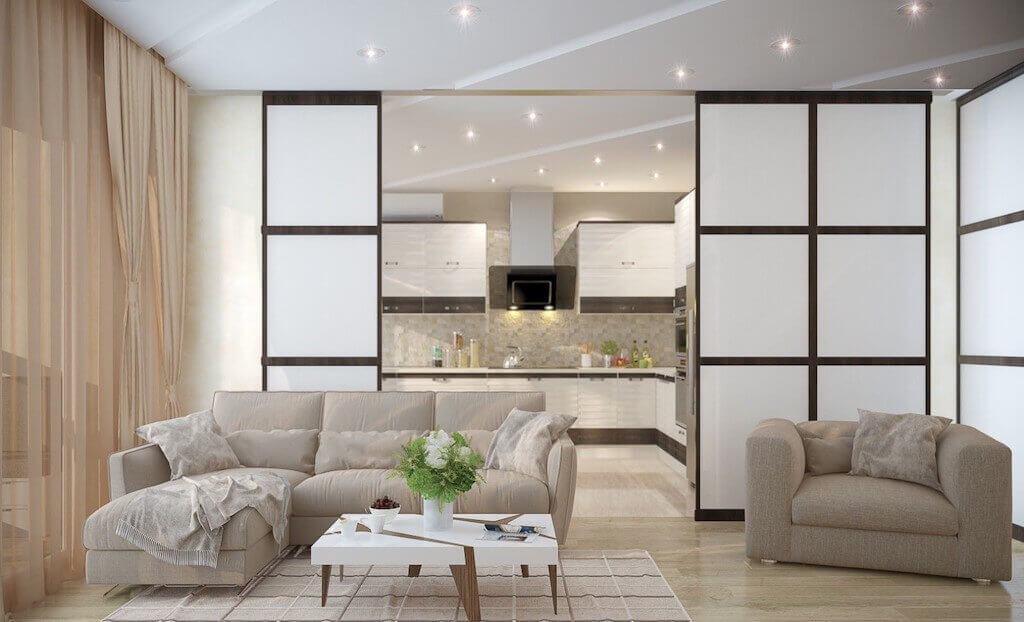 Door leaves rarely have more than two leaves, so they are installed between the kitchen and the room when it is necessary to emphasize the division of space into two separate areas clearly. 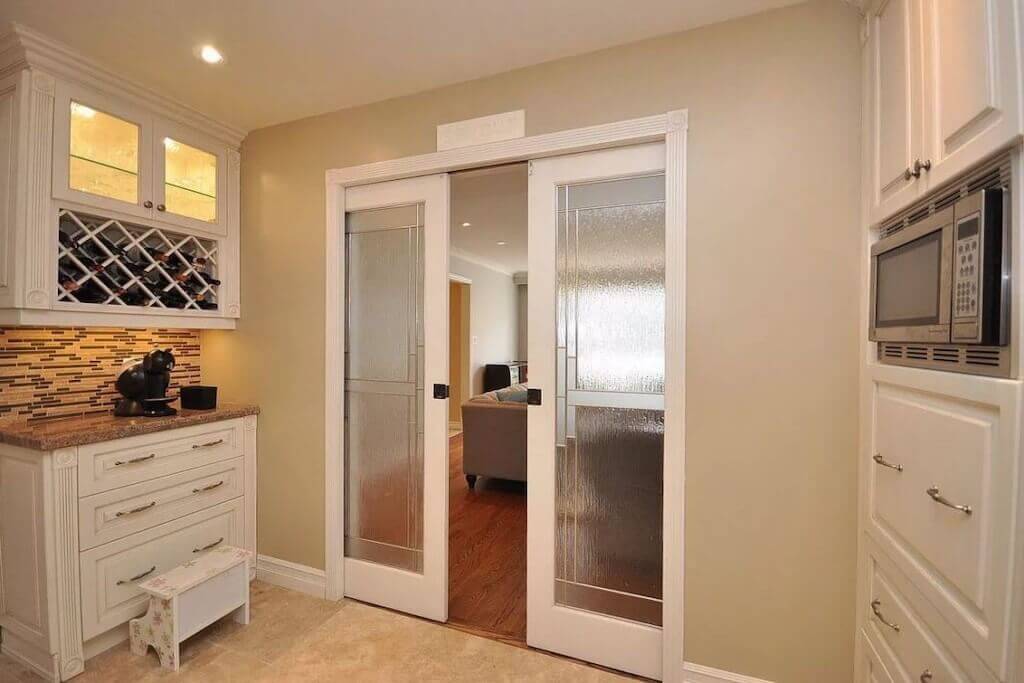 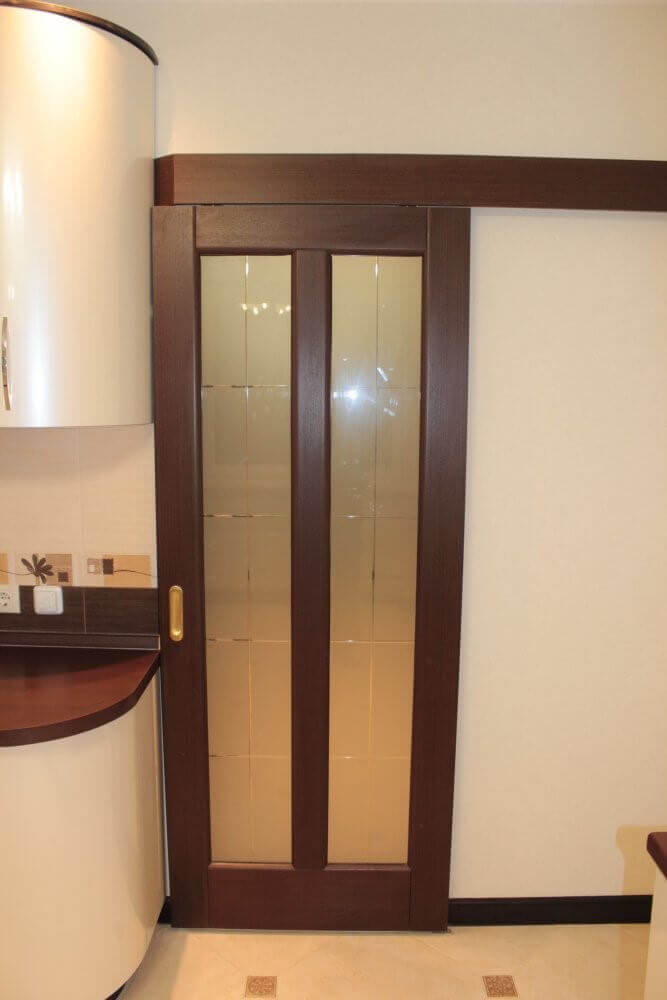 This classification is more of a mounting method.

“Coupe” is called a canvas that, after installation, moves along the wall. With this installation, it always remains in sight. The cost of such an installation is less, but the result does not always look aesthetically pleasing.

When installing as a “pencil case”, a false wall is additionally made. As a result, when opening, the canvas hides in a particular niche. The fastening system also remains hidden from prying eyes. The disadvantages of this installation method include additional costs for the construction and strengthening of a place and the loss of precious centimetres of usable area. But as a result, the look is more aesthetic and complete. 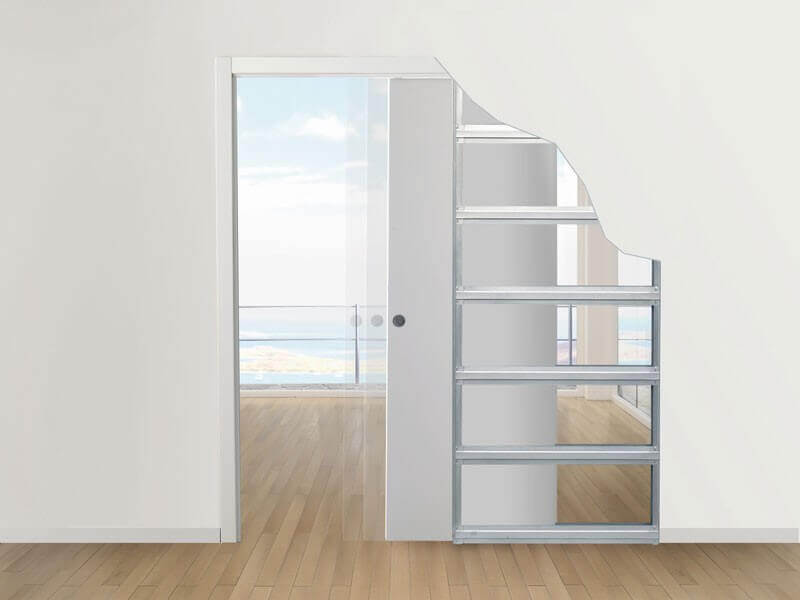 Types of doors that are mistakenly classified as sliding

Since ancient times, the swing mechanism was considered the standard opening option. Over time, the range of doors and ways to open them expanded, but historically it happened that most of the non-standard ways of opening were called sliding. Although they are not.

Most often, folding doors are considered to be roll-out doors. This happens because when folded, the canvas slides along the top and bottom of the box.

But this type of mechanism has several differences from standard sliding door systems:

As a result, this design is closer in functionality to a conventional swing leaf.

Depending on the type of folding, such canvases are conventionally divided into two types: 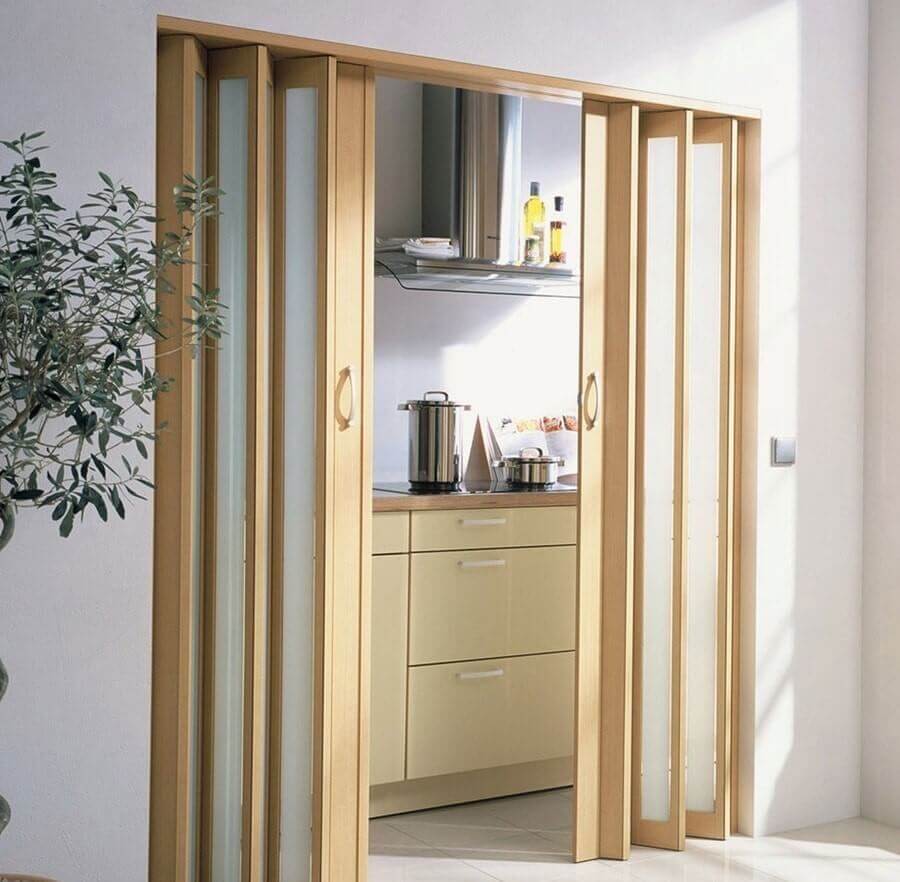 The canvas has several fold lines. These models are cheaper but less reliable and convenient. The canvas can occupy up to 20-30% of the area of ​​the passage, and the canopies eventually diverge at the folds; 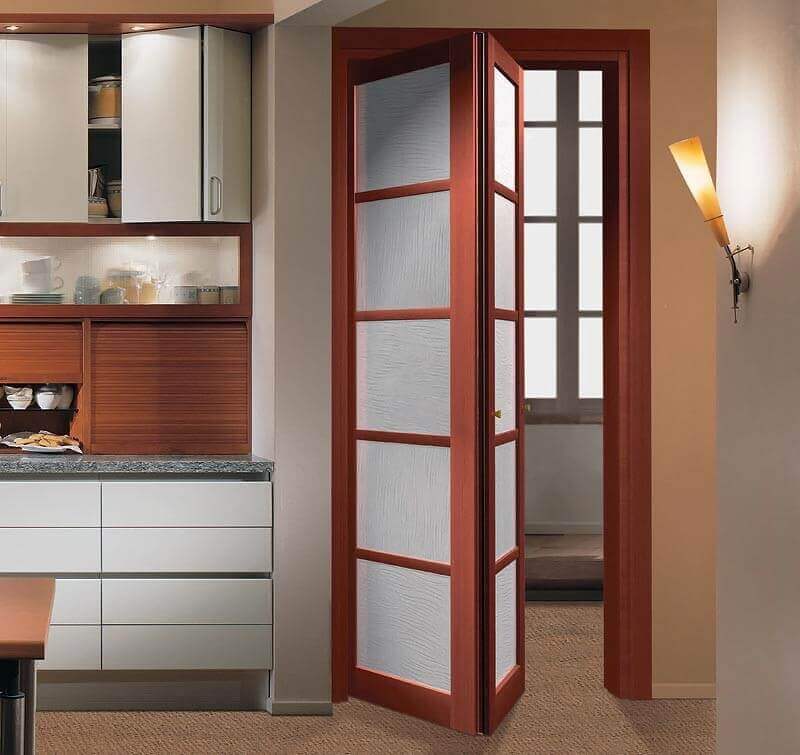 With one fold line (like doors in a trolleybus). This design takes 8-10 cm from a clean opening, is more reliable and functional, but the cost of such models is relatively high. 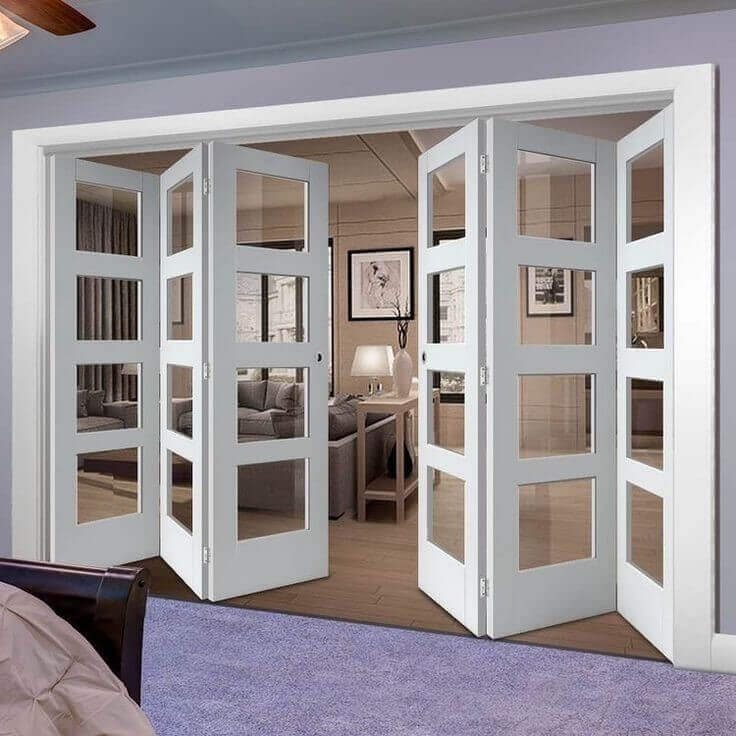 Multi-leaf folding models are very rarely used as a dividing partition between rooms. This is due to the high price of such doors in non-standard dimensions. 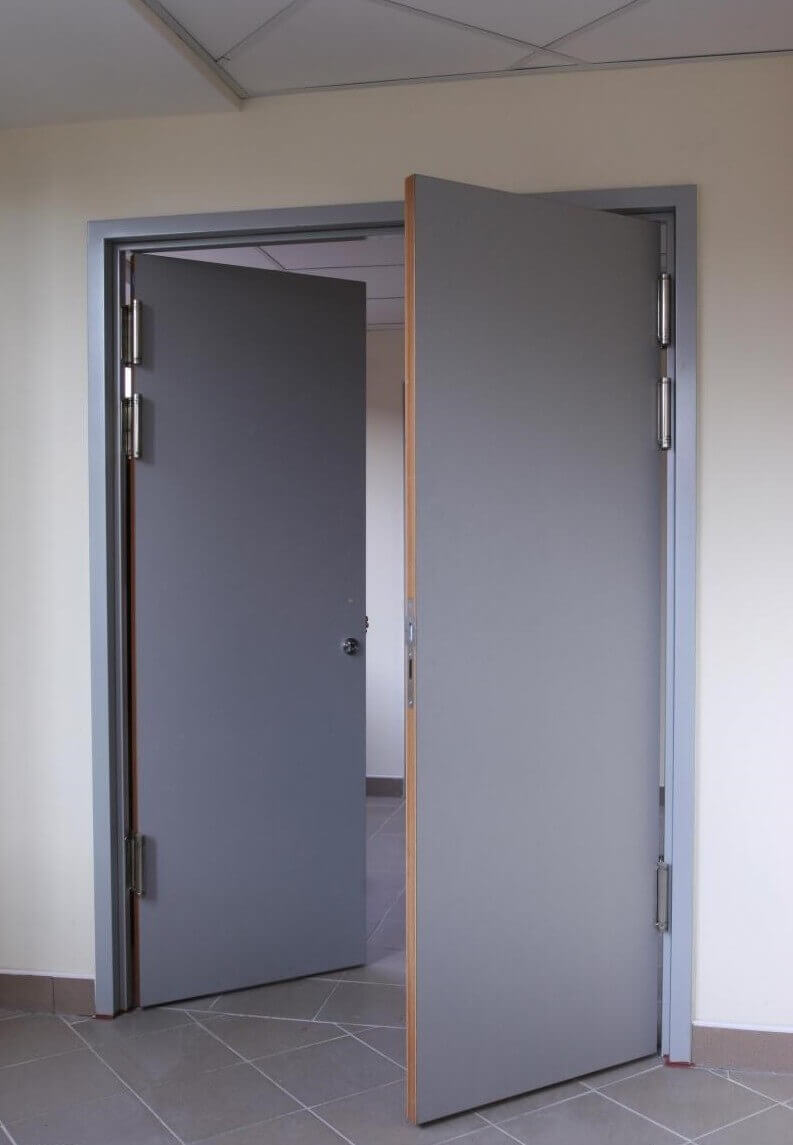 This is another non-standard type of opening, which is sometimes mistakenly referred to as a roll-out opening.

The opening mechanism, in this case, uses a conventional swing, but the hinges and trap have a non-standard design, which allows the canvas to open in both directions.

They are not used in ordinary kitchens (the mechanism is quite expensive, but it does not have significant advantages when used in everyday life); they are used only in large objects with high traffic (canteens, cafes, restaurants, etc.). 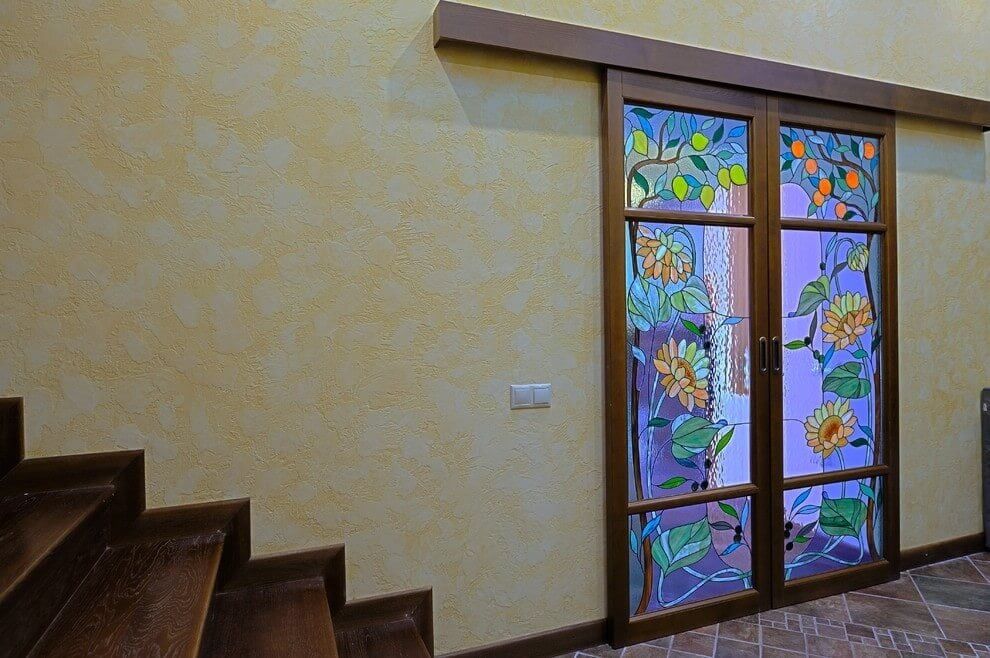 It is advisable to decide on a specific model and the method of opening it at the initial stage of the repair to prepare the opening for it properly. In this case, you need to take into account the appearance of the selected model.

So, stained glass or entirely glass sliding partitions are very fragile. If the family has small children, choosing the installation method in the “pencil case” is better. This will save not only the sliding canvas but also protect small households from possible injuries.

Before starting the installation work, you need to level the floor and decide on its finishing coating (it affects the height of the opening).

Installation in a “pencil case.”

There are no universal sizes, and the niche is prepared individually for a specific model.

1. Arrangement of a niche. 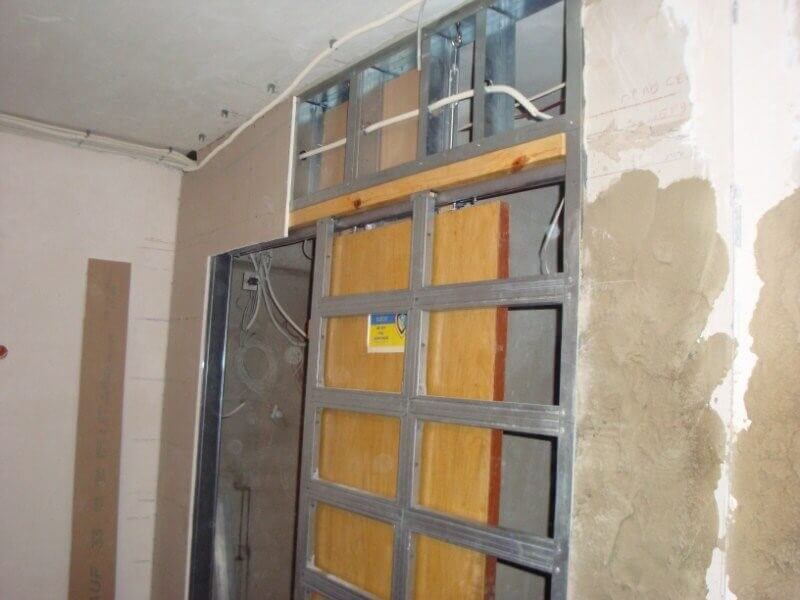 Its size should be such that the departed canvas partially peeks out (so it is convenient to grab and close it). In this case, the protruding parts (handles, decor) should not cling to the niche walls when opening. It is also worth considering the structure’s weight and, if necessary, pre-strengthen the part of the wall on which the upper guide will be mounted.

2. Opening preparation. With this method of installation, the presence of loot is mandatory. Therefore, the space is prepared with a margin. So for a canvas of 2000×700 mm, the opening should be 2100×800 mm.

3. Installation of guides. In some cases, the bottom rail (if needed) is lowered and installed on the floor. This design turns out to be more practical, and such a design looks more attractive. True, it would be best if you thought about this moment even at the stage of levelling the floor.

4. They were hanging the canvas. It is necessary to ensure that the gaps are minimal, but at the same time, the canvas does not rub against the frame during movement.

Zoning with sliding doors is done. Similarly, only niches are made on both sides. 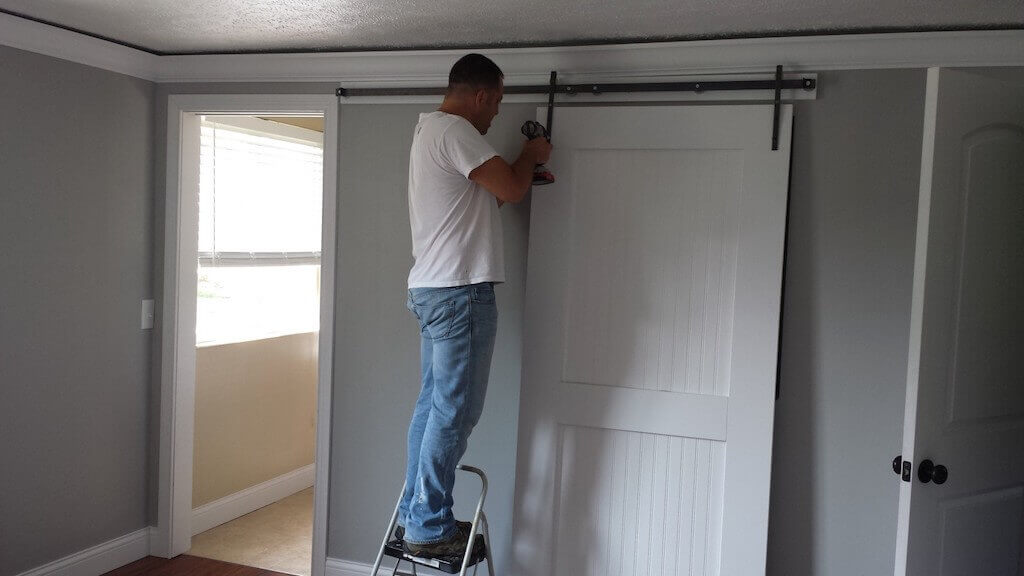 Compartment doors are easier to install. If the installation is planned complete with loot, then the opening is prepared in the same way. If there is only a canvas on the guides, then the introduction should be slightly smaller than the canvas (so that it completely blocks the passage).

The rest of the installation is identical to the “pencil case” construction. Not too expensive models can make quite loud sounds when driving. To get rid of the rumble, you need to place a rubber band in the mounting points of the guides before installing. It will smooth out vibrations, thereby hiding noise. 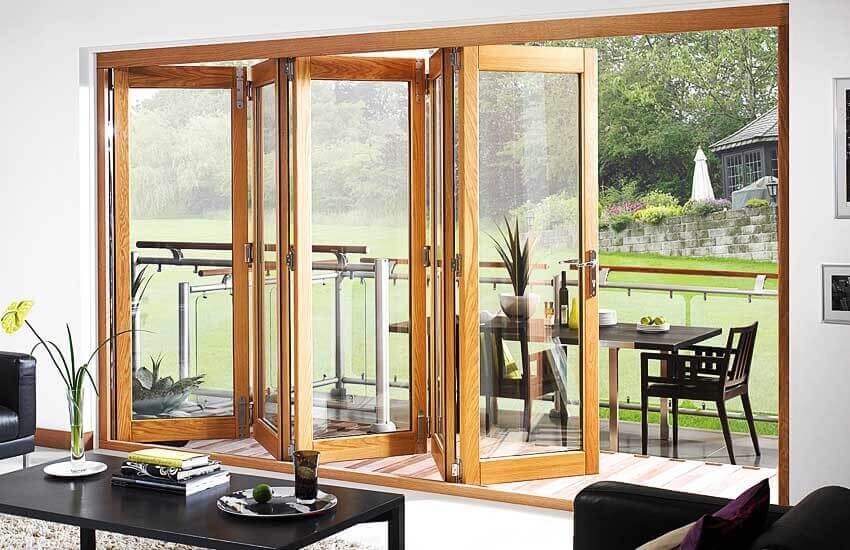 Such designs are often placed on distinguishing between a kitchen and a terrace or a balcony. The system is entirely similar to ordinary plastic windows. Still, the structure of the hinges and locks is such that, in addition to the standard swing-out mechanism, the entire system can move like a folding accordion.

Installation and adjustment of such mechanisms are carried out only by professionals. Otherwise, the sashes will not function properly.

15 Herb-growing Ideas For The Kitchen

Beige Tone Kitchen For Your Interiors

A Country House And Flat With A Chalet-style Kitchen

An Art Deco Kitchen’s Geometric Allure: A Guide To Design