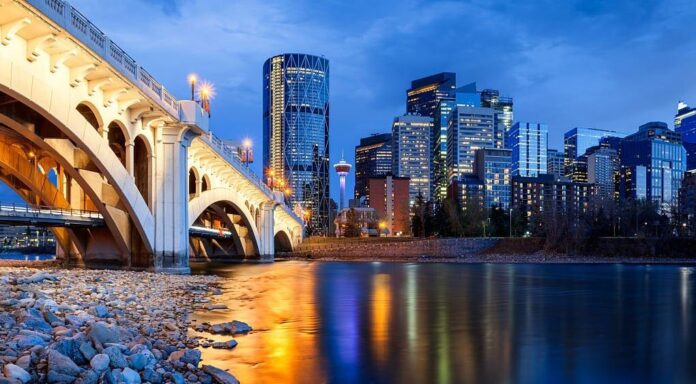 Alberta is one of the most beautiful places on Earth, yet it’s often overlooked for shinier cities or coastal areas. Alberta isn’t just small towns; it’s gorgeous cities, vast mountain ranges, thick rivers, and some amazing people you’ll ever meet.

These are the top things to know if you’re considering retiring in Alberta!

The scenery in Alberta isn’t just open plains! Although some may assume most of the terrain in this province is flat, the Rockies make their way through and create breathtaking formations that the parks Jasper and Banff call home.

In the summer, most of Alberta is a bright green, only to turn golden as the season shifts, and then eventually, it becomes a winter wonderland. Banff is known worldwide for skiing and snowboarding, and the rest of the area offers everything from ice skating to ice fishing!

Drier Air Than Many Areas

If you struggle with eczema in the winter or can’t handle dry air, Alberta may not be the right choice. The atmosphere here is extremely dry, especially in the winter, and can lead to chapped lips and dry hands.

Although you can moisturize and put a humidifier into your home, it’s not an area with extremely moist air.

The Lower Cost of Living

The cost of living in Alberta is extremely low compared to the rest of the country! For example, you can buy St. Albert real estate for a fraction of what you’d pay for similar land in Toronto.

Although cities like Calgary and Edmonton have price hikes compared to the rest of the province, it’s still far more affordable than the national average. This can be fantastic for retirees trying to make sure their money stretches as far as possible.

Attachment to the Past

If you love nostalgia, Calgary has you covered. From the Calgary Stampede to the rich cultural history of the first nation people who have lived here for thousands of years, you can learn a lot from the uncovered history as you live here.

This attachment allows you to get to know the province better and gives you insight into how it became today’s amazing place.

There’s no sugar coating it; the winters get pretty rough. Temperatures can drop far below freezing, and the snow can pile up quickly when it decides to.

Although those in Canada know that it’s not as bad as areas like Quebec or Saskatchewan, when it comes to snow, if you’re not used to cold temperatures, it can be a huge shift. No matter where in Alberta you settle, you’ll need to buy or bring warm clothes when you move.

Everyone Should Consider Alberta!

Alberta should be on the top of everyone’s list when considering places to move. It is inexpensive, but it’s also one of the most beautiful places on Earth.

From the glaciers of Jasper National Park to the beautiful Bow River, every inch of this province is stunning and deserves to be memorized.

How To Ensure Your Pets Are Safe & Warm When Alone