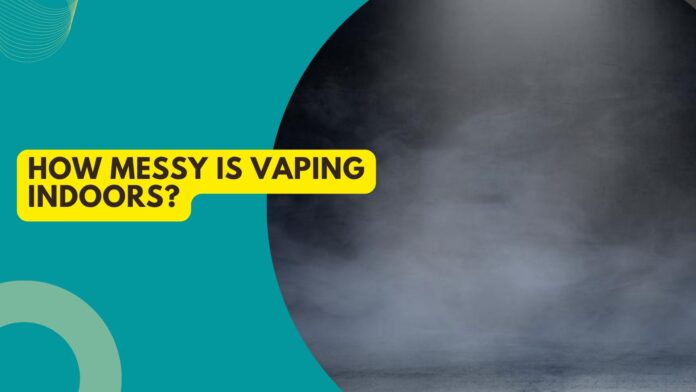 Smokers are increasingly ditching cigarettes in favor of vaping. While being made to smoke outside in most places is expected these days, the fact that e-cigarettes don’t typically leave a foul smell or any tar residue behind like their combustible counterparts makes them very tempting to use indoors.

Because e-cigarettes still produce vapour clouds, it’s reasonable to wonder how messy vaping is indoors. If you are a vaper and are tempted to start puffing in your home, take note as the experts at leading UK vaping brand LiQuid explain the key things to be mindful of when vaping at home or in any enclosed space for long periods of time.

If you’re an avid smoker in the home, you will be familiar with those yellow nicotine patches on walls and probably assume the same thing will happen with e-liquids. However, while e-liquid can contain nicotine, it is vaporized as opposed to combusted, meaning it dissipates more easily.

Furthermore, according to Public Health England, e-cigarette vapour contains 95% fewer additional chemicals than cigarette smoke, which means you will likely avoid the thick layer of dirt left by cigarettes.

That does not mean that vapor has no effect. While it won’t stain your walls with a nasty yellow or orange tinge, exhaled e-liquid clouds settle, leaving behind a slight residue. This residue is predominantly water vapor, but it does contain small amounts of nicotine and flavoring too. However, this is not typically in a high enough concentration to actually stain anything unless you vape a lot every day in a small space.

The vapor residue is more noticeable on smooth polished plastic, metal, or glass surfaces (like glass-top tables or your TV), which can become dull. If windows are not cleaned of vapour residue on a regular basis, they can become visibly foggy.

The good news is that this residue can, in most cases, simply be wiped away with a clean, dry cloth. Try to ensure the cloth does not leave behind fluff or bits—a good microfiber is recommended for the job! If you regularly clean as part of your routine anyway, it is not likely you will ever even notice vape residue at all.

There is nothing more annoying than triggering the smoke alarm, sending you into a panic to rush for a chair to stand on to press that annoying little button. Cigarette smoke, like burning toast, can easily set off a fire alarm in enclosed spaces if present in sufficient concentration.

Setting off the smoke alarm while vaping depends on the type of alarm installed in your home. Heat detectors shouldn’t ever be set off by e-cigarette vapor alone, as it is far cooler than cigarette smoke. In fact, we fitted Liquid HQ with heat detectors so we can test all our new e-liquid flavors without the fear of summoning the firemen!

Smoke detectors, however, are a different story. Vaping can cause these fire alarms to go off due to the detection of a change in particle density, as they are extremely sensitive to airborne particles, and if you blow excessive vapor while near the fire alarm, it may be triggered.

The type of vaping device you use can have a significant impact on the likelihood of making a racket. High-power sub-ohm vapes producing massive clouds in a small room are almost always going to result in an alarm going off. Smaller devices carry less risk but can still have the same effect if used excessively.

Take precautions, especially if you live in a rented home and have no control over the type of alarm installed. Smoke and particle detectors are far more common than heat detectors. Ensure you have proper ventilation and airflow while being mindful of the size of your clouds. Doing this will mean you have a better chance of vaping inside without triggering an alarm.

Along with the staining we have already mentioned, soft furnishings are sponges for foul odors. Cigarette smoke can be trapped in upholstery in your home and cause it to take on a stale smoky smell, which is difficult to get rid of once it has set in.

Thankfully, vaping will not leave this nasty smell on any of your soft furnishings, but it is not without risk. While not as much of an invasive issue as vape residue or setting off the alarms, your upholstery and even clothes are actually at risk from staining. In this case, however, it’s probably going to be your fault!

What we mean is that if you are a regular in-home vaper, you are inevitably going to top off, clean your device, or swap coils while sitting around in your favorite chair. This opens you up to the risk of staining from the e-liquid itself.

While e-liquid won’t typically leave a nasty, bright-colored stain, it actually stains very much like grease. If you spill raw e-liquid or it leaks onto your clothes or soft furnishings, it will almost always leave a dark smudge, a bit like a damp patch that just won’t dry up! This will almost always wash out; this is far easier to do to your clothes than an expensive cushion or couch cover, which will often require specialist or dry cleaning. You can save money and reduce the risk by doing any messy maintenance on the kitchen counter or by covering any upholstered surfaces with a lot of paper towels.

Keep One Step Ahead

While vaping in the home doesn’t carry as much risk as cigarette smoke, there are certainly things to be aware of to ensure you don’t end up making a mess. Take care, be sensible, and follow the advice above to ensure you stay one step ahead of your clouds and vape residue. After all, your home is your castle, and nobody likes a castle that’s covered in vape juice!

Different Ways To Use Your Nightstand For Storage

Top Eight Reasons to Use LED Strip Light for Bedroom

How To Make A Care Home Room Feel More Like Home